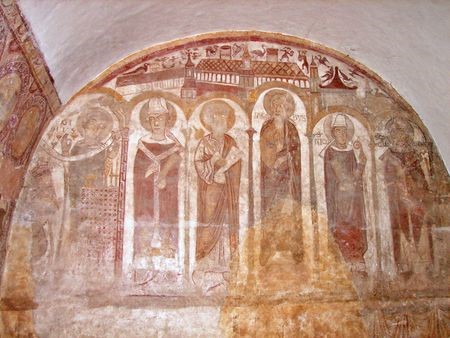 Few buildings are as rich in history and beauty as the ancient cathedral of Chartres in France. It is one of the most beautiful buildings in the Paris region and is famous for the bright blue of its mighty windows.

Inside the colossal church, numerous secrets can be discovered that attract esoteric and believing Christians from all over the world. If you happen to be in the church building on a Friday, you will especially notice the barefooted people walking with their eyes closed through a labyrinth set into the floor of the central nave. While historians believe that it represents the labyrinth of the Minotaur and that the explanatory image that once adorned its centre was removed in 1792, others believe that the labyrinth connects the church with all sorts of earth forces. The church is built over an old Gallic well sanctuary, the traces of which can still be seen today in the form of a quadrangular well in the crypt, and is therefore certainly of religious importance from many points of view.

Here, however, only one detail of the church shall be talked about, albeit a particularly peculiar one.

It is a poorly preserved fresco, located in the lower church of the cathedral, which seems to show a saint holding a computer program in his hands. One sees small circles and small crosses lined up side by side in a large square.

The guide who lets the visitor discover the cathedral has no explanation for the odd representation. He means it shows a “phylactère”. That sounds impressive at first, but on closer inspection, it is nothing more than a speech bubble.

If you look at the picture, it does not show a speech bubble at all though, but rather a kind of list. Various assumptions come to mind and the first thought leads to Goethe and Faust. To a witch’s riddle. Who does not know the famous “You must understand! From one make ten, And two let go, And three make equal, So are you rich,” which Mephisto sings in ‘Faust’. Faust says to the words that sound strange to him: “I have the impression, the old one speaks in fever,” but also in Hansel and Gretel by Humperdinck the witch uses similar words.

So do we look at the fresco at a witch’s riddle?

Most probably not. The fresco in Chartres is older than Goethe and it is to be doubted whether the choice would have been made to show a reference to a witch’s sayings in the church. Like the spell ‘Hokuspokus’ (from hoc est corpus meum – this is my body), these kind of riddles propagated by popular culture are only a corruption. Often, the witch’s riddles are actually a confused representation of a magic square. A magic square is a square arrangement of numbers or letters that meets certain requirements. For example, that however you calculate, you always get the same result. If we look at the fresco in Chartres, however, there is no such result. There are always crosses and circles to be seen in beautiful variety, without that a calculation would make any sense.

So what is it then?

It is a register of sins. And here is its story.

Saint Aegidius, called Saint Gilles in French, was born around 640 in Athens and died, according to legend, on 1 September 720 in today’s Saint-Gilles. He was a Greek merchant and later abbot of Saint-Gilles Abbey in southern France. Saint Aegidius is one of the fourteen Catholic emergency helpers and was one of the most popular saints in the Middle Ages.

The legend goes, that ‘a Franconian ruler’, later it was said to have been Charlemagne, tried to obtain forgiveness for his sins and requested the intercessions of Saint Aegidius. An angel then brought, at the request of the saint, a note on which all the sins of the said ruler were recorded, and the forgiveness of the sins took place on the altar at which Aegidius performed his office, with the sins disappearing mysteriously from the note.

Despite the fact that Charlemagne lived much later than Aegidius, the popular legend spread quickly and since then Aegidius has been regarded as a helper in need and promises forgiveness after confession.

The scene of how Aegidius provides Charlemagne with forgiveness of sins is depicted in the church of Chartres. It resembles only by chance a more modern computer program.

Charlemagne was dear and holy to the church lords of Chartres because he left them a tunic that is said to have belonged to the Virgin Mary. He certainly also had to ask for much forgiveness, as he is said to have done away with the two children of his brother Karlmann I.