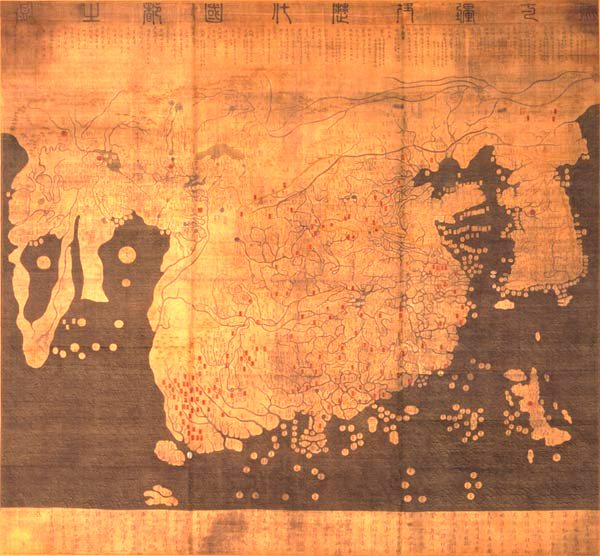 Even before Christopher Columbus, Bartolomeu Dias and James Cook, the Chinese sailors, attentive to the wind and currents of the ocean, wanted to expedite the notion of adventure. Crossing large seas, with stunning and boundless winds, they made their way to seven adventurous travels around the world. It was 87 years after the first trip of the Chinese fleet that Columbus discovered America, 93 years before Vasco da Gama got a glimpse of the new seaway to East Africa and 116 years until Magellan passed through his famous strait. Here are the extraordinary maritime adventures of Admiral Zheng He.

According to books, in 1487, the famous Portuguese explorer Vasco da Gama was the first international merchant to reach East Africa. However, Arabs were there before him and there is evidence that the Chinese approached the African coast before the arrival of the Europeans.

The story is mainly known by the tale told from generation to generation by the African Washanga tribe. This legend tells the story of a ship that sank along the coast of Pate, near the town of Siyu. The crew had no means to return to their country and had to settle at a place called Mui Wanga Bakari. The Chinese sailors married local girls from the region. Today, the Washanga Pate and those who live in the vicinity of the Bajun Island all attribute their descendance to a Chinese ancestor.

You may also want to look to another part of the earth. When you flip through the songs of the Aborigines, especially those of Baijini, you may be struck. Arnhem Land in Australia is full of stories of visitors on large sailing ships during the northwest monsoon from October to November. The legends places the events it recalls before the arrival of the Indonesians and Europeans. The description of their faces and customs are reminiscent of the Chinese: yellow complexion, rice cultivation and multicolored dresses.

According to many researchers, the contacts between China and the rest of the world date back to medieval or even ancient times. In the era of Emperor Zhu Di, the commercial and cultural ties were forged between Asia, Australia, New Zealand, Cape of Good Hope, West Africa and the Caribbean by Chinese fleets commanded by Admiral Zheng He. Chinese historians recount the story of the former Chinese Muslim navigator and Eunuch who travelled around the world 600 years ago and allowed China to gain a friendly and powerful reputation.

In the 13th century, the Mongol empire extended over most of Eurasia, a vast area ranging from Korea to the Adriatic Sea. The Mongols overthrew the Chinese Song Dynasty and the Ming Dynasty. Once peace returned, China regained power and prosperity. The third emperor of the Ming Dynasty, Zhu Di or Yongle, ruled over China from 1403 to 1424. He left the headquarters of the Nanjing (southern city) and moved to Beijing (northern city), restored internal stability and allowed China to embark on its biggest naval expedition.

The Mongol Empire ensured the intense trade along the Silk Road by circulation of people and goods. At the end of the Mongol rule, trade became more difficult, and the potential to develop new trade routes were explored. China built thus an impressive fleet. Floating palaces were specially designed to impress foreign authorities and persuade them to obey Chinese supremacy. According to chronicles, the mother ship of the fleet was 140 meters long and 50 meters wide, and could carry hundreds of men.

The commander of the fleet was Admiral Zheng He, a Muslim with a subtle mind, who led seven commercial and diplomatic epic voyages for almost three decades. With its huge fleet, called Treasures Fleet, he toured more than 30 foreign countries of Southeast Asia, Africa, Arabia, and explored more than 50,000 km of the seas.

The fleet was ready for the first time in 1405. At that time, China had more ships at sea than the rest of the world united. Zeng He’s floating fortresses embarked on each trip with more than 20,000 men, including sailors, administrators, interpreters, soldiers, artisans, doctors and meteorologists. Zheng He sailed to Java, Sumatra, Bengal, Ceylon (now Sri Lanka), then to the Malaysian coast of Siam (now Thailand). He sailed along the west coast of India and went to Hormuz, Aden and Mecca. Zheng He led other expeditions to the Maldives and along the east coast of Africa in Mogadishu, Mombasa and the Mozambique Channel. Record shows that he visited 37 countries and regions between 1405 and 1433.

The expeditions of Zheng He were also ambassador missions. When he arrived in a country there was no looting, conquest of territory and no slavery. Zheng He offered art objects to local dignitaries who he hoped to persuade by his generosity to recognize superiority of the Ming. As a result of these trips, unknown animals such as giraffes arrived at the Emperor’s court. These gifts were made to the Chinese emperor in exchange for lavish thank you gifts he gave to Admiral Zheng He.

In 1433, twenty-eight years after the first trip, the official Chinese expeditions stopped. Zheng He died during his last trip. The Yongle Emperor died long before the admiral.

A change of mind explains the discontinuation of the amazing adventures. Imperial China from then on considered itself the center of the world and that it had nothing to prove by spending money on sea expeditions. At the same time, the European nations ventured in search of a sea route to the ports that had been abandoned by the Chinese.

The Europeans were wrong to believe that they were technologically advanced and the only ones to have explorers like Christopher Columbus or Vasco da Gama. China had material resources, scientific knowledge, ships and sailing experience for this kind of expedition. If Zheng He had continued to sail the seas, history would have been different. We might be writing in ideograms worldwide by now.

In 2010, archaeologists discovered a wreck off the coast of Lamu, Kenya, that they hoped to have been part of the fleet of Admiral Zheng He. The research was discontinued and now focuses on the Ngomeni shipwreck at the close-by Malindi instead. it is Portuguese and dates of the times of Vasco da Gama.

Another effort was made to find wreckages of Zeng He’s ship off Oman. There as well the research was discontinued and has now rather focused on a Portuguese ship.

For now Zeng He’s fleet has escaped the researchers. But they keep looking.

Image: The Kangnido map (1402) predates Zheng’s voyages and suggests that he had quite detailed geographical information on much of the Old World.