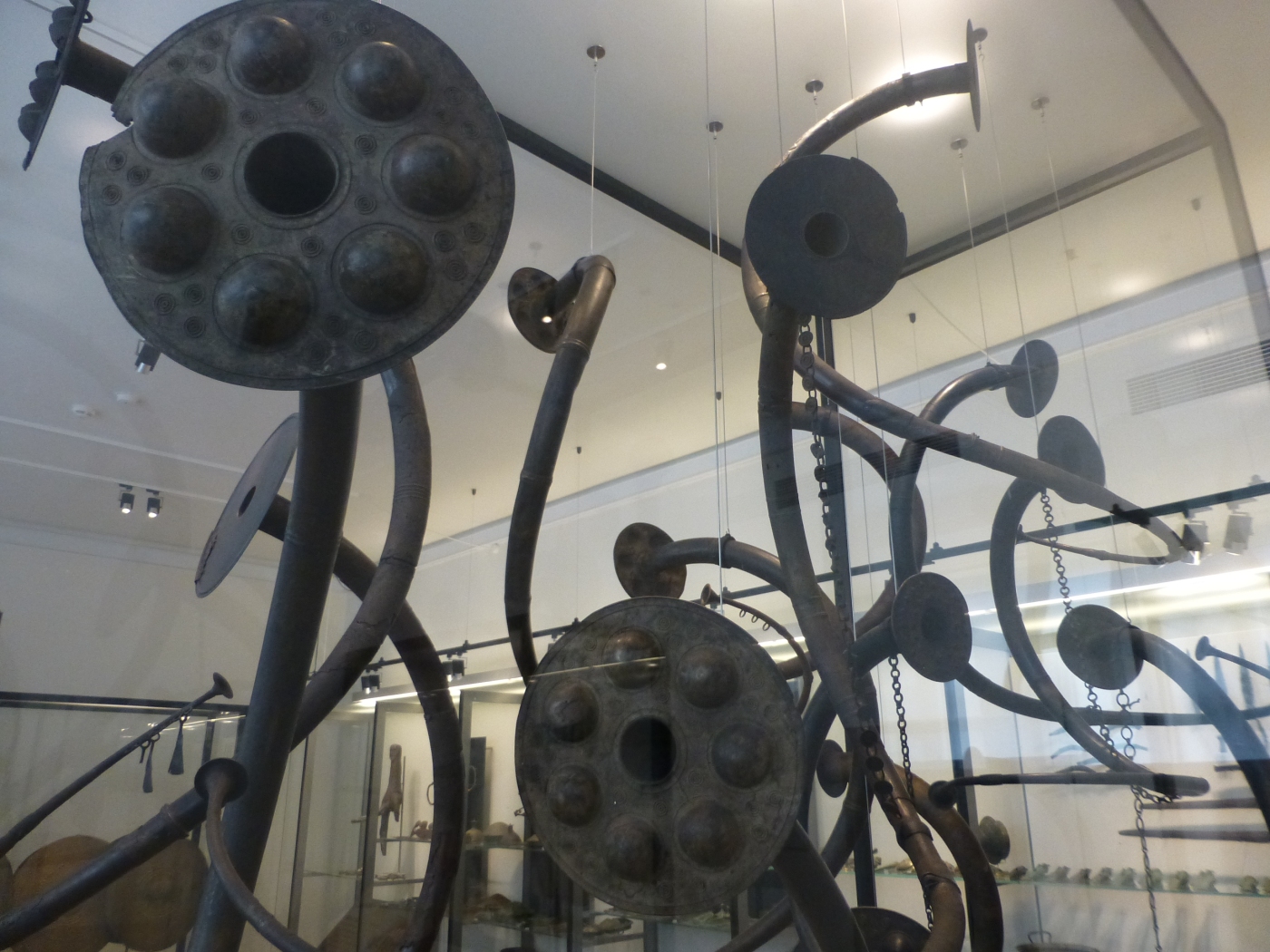 Whoever visits the Danish National Museum in Copenhagen will find himself in the presence of a large vitrine containing some of the strangest objects ever found in an archaeological site. They are elaborate, over man high bronze horns, wound up in a 2-meter curve. It seems, whoever played those horns must have been a giant. The place they were discovered in, is even stranger than their shape. They were found in the peat of the Danish bog landscape, as so many other objects, axes, weapons and until today even almost 600 dead bodies.

Scientists found that the rivers, lakes and swamps of the Nordic countries were preferred sacrificial sites for the Germanic tribes, that often broke and sacrificed the arms of the defeated after victory and placed them together with other sacrificial objects in watery locations. The most well-known of such kind of offerings is certainly the famous hoard of the Nibelungs.

Due to their tranquil setting and their chemical ingredients the Bog swamps did especially well preserve the objects entrusted to them. Among their intriguing contents count not only musical instruments and weapons, but also the astonishingly well preserved bog bodies. Bog bodies have been found in Denmark from as far back as the Mesolithic age with the approximately 10,000-year-old Koelbjerg-woman as the oldest example. It is supposed that many of the human beings found were sacrificed to the goods or punished.

In what concerns the Lurs, these afore-mentioned bizarre musical instruments, were first found in 1797 in the bog Brudevælte Mose in northern Zealand. During peat-digging a farmer, Ole Pedersen, found 6 of these large curved brass horns. At one end of the tube he discovered a mouthpiece and at the other, at the exit of the air that is blown in, an ornamental plate decorated with between six and ten round depressions, eight being the most common number in the lot. Some Lurs that have been found since have small rattling-plates at the mouthpiece or the ornamental plate, and some have a carrying-chain.

A total of 56 Lurs have been discovered until today. 35, including fragmentary ones, in Denmark, 4 in Norway, 11 in Sweden, 5 in northern Germany, and a single one in Latvia.

These Lures date mostly from the Bronze Age, that means they were created around 1.200-700 BC and are special to the North, used for Bronze Age rituals. Swedish rock carvings indeed show men in horned helmets playing such Lures. After use, the Lures, it seems, were sacrificed in the bog. None were until today found in the burial mounds, as it seems all of them were sacrificed in the low-lying swamps.

The earliest references to an instrument called the Lur come from Icelandic sagas, where they are described as war instruments, used to marshal troops and frighten the enemy. These specific Lurs, several examples of which have been discovered in longboats, were straight, end-blown wooden tubes, around one meter long.

Bronze Lur are to be seen separate from the wooden Lurs. They are most probably unrelated and were named by 19th century archaeologists after the 13th century wooden Lurs mentioned by the historian Saxo Grammaticus.

Bronze Lurs seems to have had a greater ritualistic meaning and date back to the Nordic Bronze Age, probably to the first half of the 1st millennium BC. They are roughly S-shaped conical tubes, without finger holes. They are end blown, like brass instruments, and sound rather like a trombone. The opposite end to the blown one is slightly flared, like the bell on a modern brass instrument but not to the same degree.

The word “Lur” is still very much alive in the Swedish language, indicating any funnel-shaped implement used for producing or receiving sound. For instance, the Swedish word for headphones is “hörlurar” (listening-lurs), and a mobile telephone might be referred to as a “lur” in contemporary Swedish (derived from “telefonlur”, telephone handset).